So my excuse for the delay in posting this time was my most recent project around the house. The bathroom remodel. Quick background. Jamie and I had discussed tiling our upstairs bathroom for some time and was another one of those projects that was on 'the list'. When Jamie's Mom had recommended Kenny the Tile Guy, we figured why not. The next decision was have him do the whole job, or just the tiling. Being a little frugal, we decided that I would rip out the old tile and prep the area for him. So my entire weekend was spent ripping out the bathroom. Well, not the whole weekend, but most of it.

Here are some before, during, and almost final pictures. 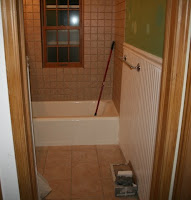 While Jamie and I were out this weekend at Home Depot, we came across a great deal on a new shower fixture. Since we are making the bathroom all new and clean, we need new shower hardware, right? Easier said than done. So I look at the old shower hardware (installed and working fine) and the new shower hardware, and they really didn't look the same. The job actually looked like something I shouldn't really do on my own, so I conceded the old shower hardware... But wait, in my genius move, I tried to 'fix' the slight drip that the spigot would have from time to time, and actually destroyed the copper pipe. CRAP! So I borrowed the torch from Jacob and attempted to fix my little mistake. After realizing I didn't have any flux or solder, I gave my neighbor Ben a call. "Hey Ben, you got a second?" He came right on over and I showed him my predicament. I went on to explain what I was trying to do (new shower hardware), but now I just want the old one back to normal. Ben looks at his watch and says "It's only 6:30, we can run to Home Depot and get the stuff we need to install your new shower." How can I turn this one down? So Ben and I ran to Home Depot and got the goods. Over 3 hours later, we were done! NO LEAKS! I have to say THANK YOU very much to Ben for going out of his way to help us out. Ben and Bonnie also gave us some fresh sweetcorn, which was yummy! That was about all we could handle during the weekend.

On Monday morning, Kenny the Tile Guy came over and started the job. Things seem to be going very smooth. Later than day, Brian flew in from California for his first visit. Jamie and Brian caught up for a while and then I joined in on the conversation when I got home from work. 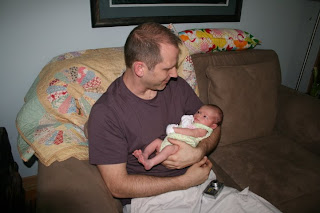 Brian and Sylvia (Eyes Open)
And tonight the house was packed! Vonnie and Debie (Jamie's work friends) came over after work to see Sylvia (and Jamie) for the first time. Jamie forgot to take pictures, so you will have to trust us! Amazingly, they didn't talk about work at all, which makes me think Jamie never really did go to work... She just got together with some ladies and chatted about boys and clothes all day. Oh wait, there was money deposited in the checking account every other week, so she must have been doing something? HMMM... Scott Montanta Imation, not to be confused with Scott Montanta 3M, used Brodd Taxi after work today to catch a ride to the airport. We had a quick pitstop so he could meet Sliver (his nickname for her... little bit of an inside joke I don't care to explain) and eat some of Jamie's great dinner... oops, I mean Liz Owens' great dinner. Wow, this stuff was awesome. Jamie really needs to step it up. I mean seriously, what does she do at home all day? Talk about clothes and boys with Sylvia? (Adam being sent to the doghouse)

It was great to see Zac, Liz, and Sawyer today and we thank you guys for the great dinner. Also, if I haven't thanked all of the others for the food, we really do appreciate it. Just because we didn't take a picture of it, doesn't mean we didn't like it. The stars were just too much. 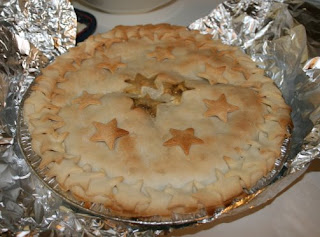 Pot Pie with American Pride
So we are going to sign off, I need to get packed for Hell, I mean Weatherford. This will be the girls first time on their own. I will be back on Friday, but I am guessing this will be harder on me than on Jamie and Sylvia.

Wow. It sounds like you and Jamie are surrounded by a great support system!

LOL! The pot pie made the blog. Too funny.. thanks for the review. Great to see you guys last night & kudos to you for tackling a bathroom remodel w/ a newborn!!