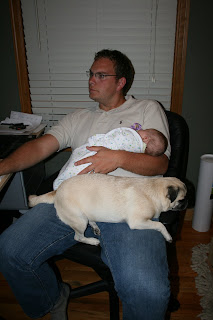 I think Adam is catching on to the dad thing. He is now able to hold Sylvie, Lucy and play on the computer at the same time. Now if he could clean the house and cook instead of doing computer stuff I would have more time for bon bons. I think Lucy is getting the short end of the stick, but I guess she thinks it's better than nothing. 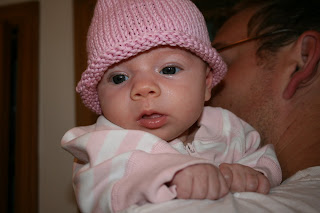 Just modeling another one her great hats. Grandma Charlie made this one. It is still a little big, but it is super cute. I don't think she will ever have a cold head, I just hope she likes hats because she has a bunch. She likes being up high on dad's shoulder. She is getting a pretty strong neck.