New Year's Eve 2012 was the perfect day for Christmas with Grandma and Grandpa Chicken.  Most were in high spirits coming off the great win by Minnesota over the Packers, but Monday was time for family and more importantly presents!

One of the traditions that Jamie and Leah had growing up was the stuffed stockings from Santa.  While Santa stopped by Charleen and Michael's house on Christmas Eve, it wasn't until New Year's Eve that the girls (and adults) could check out the goodies in the stockings.  Let's just say we won't need to buy any snacks for the next six months or so...  A Costco pack of Rice Krispie Bars, Goldfish, and Fruit Snacks is HUGE!

Then onto the presents...

Sylvia is back on her "Hello Kitty" phase, so this t-shirt was a great addition to her wardrobe. 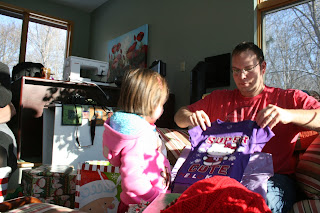 Blake was lucky enough to score a new camera, but I think the pimpin' hat was the present of the year! 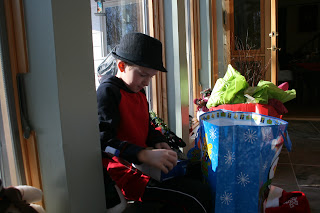 While hard to see, that is a small fish bowl with two goldfish.  "Underwear" and "Socks".  It is sad to report that "Socks" is no longer with us... 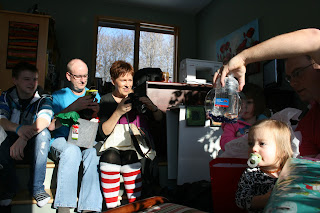 Last, but not least, was the grand daddy of them all...  A four foot tall Minnie Mouse! 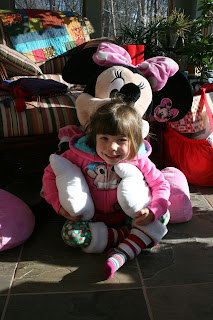 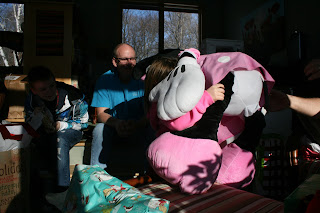 Are you kidding me with this monster!??!?!?  It did make for a fun ride home with Minnie sitting in between the two car seats.

After some more snacking, we headed home to enjoy New Year's Eve... as we were all in bed by 9:30!

Christmas Part 3 post is right around the corner... stay tuned.