To spend our first weekend away from Sylvia (can you believe that!) Jamie and I spent the weekend up in Duluth. Most of you know that Jamie and I both went to school in Duluth, so while on our way to visit campus, we drove by some of our old college homes. 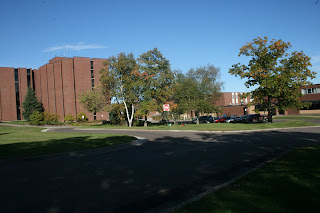 The one on the left is Lake Superior Hall (Adam) and the one on the right is New Griggs (Jamie). It turns our that there is a newer Griggs Hall, so Jamie's dorm would now be called 'Not-so-new' Griggs.

Adam's houses are in the next two images. The tan one used to be red, which is still seen on the rails of the porch, but it appears the landlord ponied up some dough to put new siding on it. I wonder if they fixed the slanting kitchen? 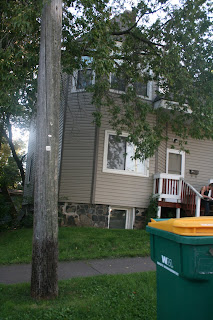 The big white one was my last house in Duluth. We had friends that lived next door and across the block. It was a great house and had many bbq's on the front porch. Memories... 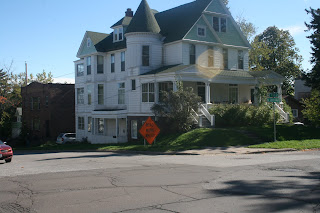 Jamie's houses are similar in age and beauty. The yellow one below was shared with 6-7 other girls and in Jamie's words was terrible. It was off-campus and she didn't have a car, so getting to school wasn't very fun. She also mentioned that the house next store housed some murderers. (Not sure if they were ever convicted) 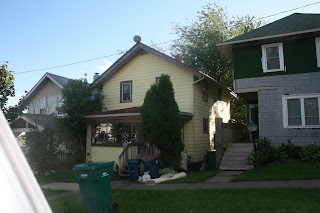 And finally, the house she spent the last three years of college in. The basement of the yellow house just across the street from campus. The things I remember about the house were it was always cold... The lady living upstairs kept turning up the thermostat, but when there is limited ducting going to the basement, you will not get any heat down there. The second thing was when she had company with a dog. You could hear the dog walking from one side of the room to the other and then plop down... It was funny and annoying at the same time. 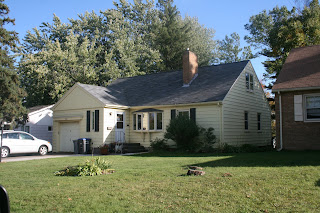 And lastly, a quick picture of a boat from the view of my red (tan) house. 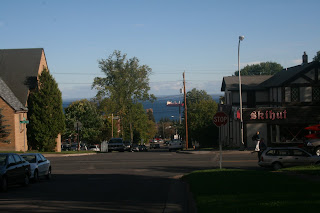 More to come in posting number 2.